Year of Prayer for Vocations 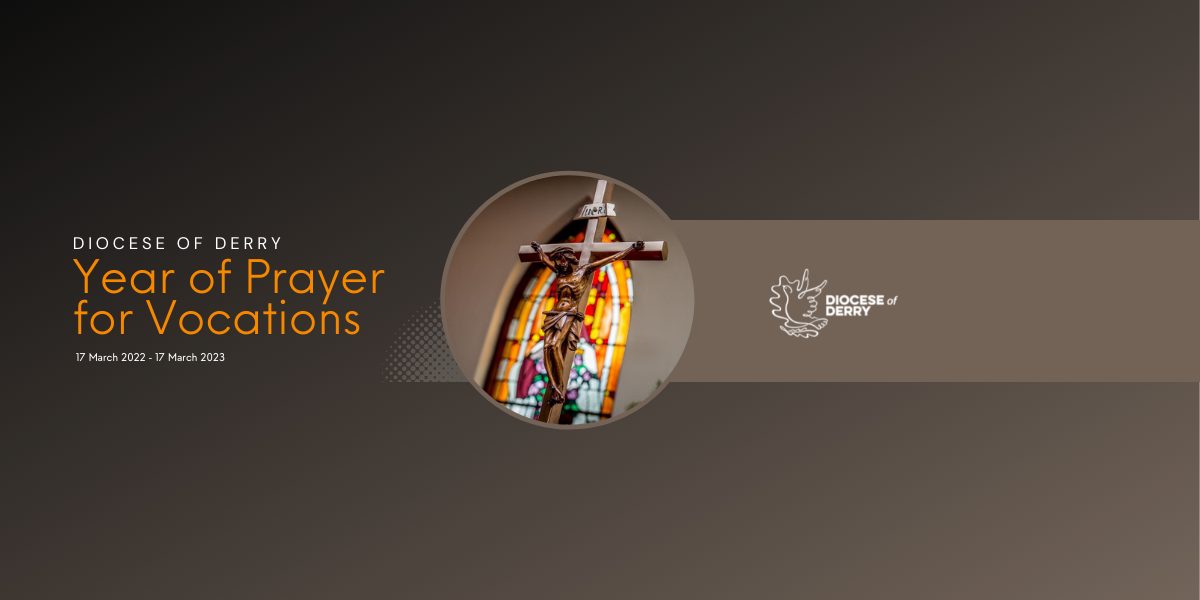 A recent survey reported that “80% of vocations come from the 20% of the parishes where there is active and ongoing prayer for an increase in vocations to the priesthood and religious life.” With this in mind the Diocesan Vocations Council, with the blessing of Bishop Donal McKeown, are promoting a special Year of Prayer throughout the diocese of Derry. The Year of Prayer, which began on St Patrick’s Day 2002, will run until 17 March 2023. Every parish in the diocese is encouraged to use the Diocesan Prayer for Vocations and to include an intercession for Vocations at Sunday and Holyday Masses. If a parish celebrates the Rosary publicly or has periods of Eucharistic Adoration, they will be asked to dedicate a regular Rosary or an occasional hour of Adoration to the intentions of the Year of Prayer for Vocations.

At present (March 2022) the diocese has five men in seminary formation, and a number of men have expressed interest in beginning studying for the priesthood.

The first step for anyone interested is to speak with their local priest who will put them in touch with Fr Pat O’Hagan, the Diocesan Vocations Director. They may, of course, contact Fr Pat directly at the parochial house in Moville (Tel: 00353 (0)74-9382057) or email pgoh2111@gmail.com

Fr Pat will put prospective candidates in touch with a diocesan priest who will act as a mentor to them while they discern the Lord’s will for them. Seminary formation begins after a propaedeutic (introductory) period, and lasts for a number of years, depending on the student’s age, experience and qualifications.

As a diocese, let us pray for Vocations, that “…the Lord of the harvest will send labourers into His harvest…because the harvest is rich, but the labourers are few.” (Matthew 9:37).

God our Father,
you call us by name, and ask us to follow you.
Help us to grow in the love and service of your Church today.
Grant us the courage to embrace Christ’s mission of love and justice.
Bless the Church here in the diocese of Derry
by raising up generous and dedicated leaders from among our families and friends,
who will serve your people as Priests, Sisters, Brothers, Deacons and Lay Ministers.
Bless those who have already answered your call
and who are now preparing for service in your Church.
Inspire us to know you better,
and open our hearts and minds to the guidance of your Holy Spirit.
We ask this through Christ our Lord.
Amen

Discerning what is God’s will for your life?

To discern a vocation is to discover the person God wants you to be. The first step is to take seriously that God has called you through being baptised. He called you to baptism so that you could grow in love and in holiness of life, not only for your own sake but for the sake of others to whom you are sent. There comes a moment in a life of faith when a person takes seriously their personal call to holiness... read more 👉